Let Trafficking Victims Have Their Day in Court

Sexually explicit language advertising the sale of children for sex is a common business practice for Backpage.com.

The National Center for Missing & Exploited Children filed an amicus brief urging the Washington State Supreme Court to allow three child sex trafficking victims to have their day in court against the online classified advertising website owned by Backpage LLC. 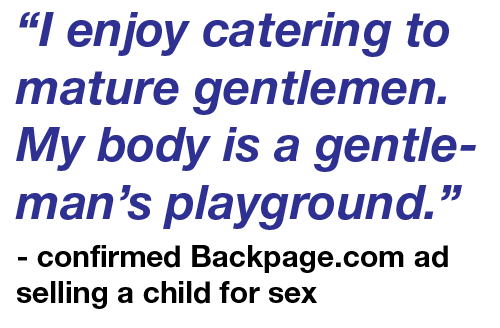 Our brief was filed in response to Backpage’s motion to dismiss the victims’ case. It argues that Backpage enables the development of child sex trafficking ads on its site, which results in the repeated sexual exploitation and victimization of children.

Despite Backpage’s knowledge that it has created a lucrative marketplace for child sex trafficking on its website, it has rejected most of our past recommendations to help reduce the selling and buying of children for sex on its website. Backpage has only made minimal efforts to curb the posting of child sexual exploitative content.

Child sex trafficking is a pervasive and destructive crime. Our amicus brief asks the court to allow the victims’ case to move forward to assure the fair adjudication of a matter so greatly important to the safety of children across the United States.

Read all the amicus briefs and underlying court papers here.