It was just one of more than 18.4 million reports of suspected child sexual exploitation our CyberTipline received last year, and it contained graphic videos and photos of an infant being sexually abused by an adult. Our analysts quickly sprang into action, trying to figure out, literally, where in the world is this child?

They tracked down a possible address in San Jose, California and made the report available to law enforcement. Within three hours of receiving the report that December day, the child was rescued, the suspect was arrested and 11 other children were removed from the home.

Over 20 years in operation, our CyberTipline has received more than 45.2 million reports of suspected child sexual exploitation – more than half of those in just the last two years. Recognizing this explosive growth, Congress unanimously passed, and the president signed, a new law to streamline the CyberTipline process and tackle new trends we’re seeing in child sexual exploitation. 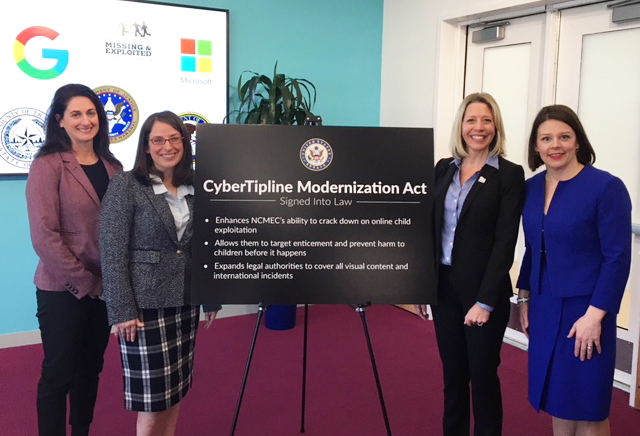 Today, a roundtable was held at Facebook’s office in Austin, Texas to discuss the impact of “The CyberTipline Modernization Act,” which is being hosted by Sen. John Cornyn (R-TX), the main champion of the legislation along with Sen. Dianne Feinstein (D-CA). Our president and CEO, John F. Clark, moderated the discussion with representatives from NCMEC, the Tech Industry and law enforcement – a unique public-private partnership that supports the CyberTipline and helps keep children safer from the escalating problem of sexual exploitation online.

Members of the tech industry, including Google, Facebook and Microsoft, explained ways the new law will enable them to stay up to date and continue robust work to identify and address new crime trends, including one we’re seeing at NCMEC: the sexual enticement of children online. They also discussed ways they ensure that the most critical reports, like the infant in San Jose, get the attention they need.

“The timeliness of this is paramount,” said Ely Reyes, Austin assistant police chief. “The quicker they can get to these children, the more likely they are to keep them from being abused. This legislation streamlines that process so that law enforcement can get boots on the ground.”

At NCMEC, our analysts prioritize the avalanche of reports into three categories: The top priority is for situations in which a child is in imminent harm, followed by a child likely being victimized and then a child who has been victimized but more information is needed to determine risk.

The new law clarifies language describing how NCMEC can make CyberTipline reports available to international law-enforcement agencies. It also broadens our ability to foster voluntary initiatives with tech companies to help them identify and curtail transmission of child sexual abuse images, which comprise the vast majority of reports.

Our analysts forward reports to the Internet Crimes Against Children task forces in each state, and NCMEC is grateful for what they do to help children. Sen. Cornyn has been a long-time supporter of NCMEC and authored legislation to reauthorize the ICACs in the last Congress.  We’re grateful for his commitment, along with Sen. Feinstein’s and other leaders in Congress, to address these critical child safety issues.

Said Einat Clarke, Facebook’s director & associate general counsel for safety: “At the heart of the CyberTipline is collaboration.”