A home movie was being shown on the evening news, and Diana Simone stopped what she was doing to watch, curious why they were featuring an excited little girl opening her Christmas presents nearly three weeks after the holiday. The blue-eyed brunette happily held up a Barbie doll for the video camera and waved and smiled as she took her new pink bicycle for a test drive.

Simone was eager to hear what this child had done to warrant a spot on the news. Her curiosity quickly turned to heartbreak. The news anchor said the 9-year-old girl, Amber Hagerman, had just been yanked off that new pink bicycle by a stranger and thrown, kicking and screaming, into his black pickup truck in the parking lot of an abandoned Winn-Dixie in Arlington, Texas. Her family was there visiting her grandparents, and she’d been riding bikes with her 5-year-old brother. He pedaled as fast as his little legs would go to get help.

Like Simone, her Arlington community desperately wanted to help search for Amber but didn’t know what to look for, even though there had been an adult who saw the whole thing. Frustrated, Simone called a Dallas-Fort Worth radio station with an idea: We have weather and civil defense alerts – why not alerts for critically missing children? Amber’s body was found four days after her Jan. 13, 1996 abduction in a creek bed, her throat slashed. Her killer has never been found.

In the wake of the tragedy, Simone’s idea eventually took off and became what is known today as the AMBER Alert System, which was designed to quickly galvanize a community to help search for critically missing kids. Now, 24 years after it began, America’s Missing: Broadcast Emergency Response (AMBER) has reached a remarkable milestone: its 1,000th success story with the recovery of four children in Wyoming believed to have been in imminent danger.

“It’s so uplifting, especially during this time when you’re seeing so many negative examples of selfishness,” said Simone, describing the public’s enduring response to AMBER Alerts as humanity at its best. “To see that the country’s spirit and caring is still very active is heartwarming to say the least.” 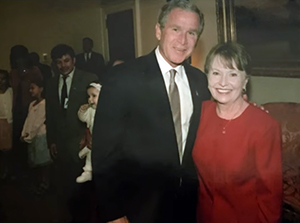 Diana Simone at White House with President Bush in 2003 for signing of the PROTECT Act.

The 1,000th successful recovery came when the Fremont County Sheriff’s Office in Wyoming requested an AMBER Alert for four missing children, ages 5, 6, 11 and 14, from the Arapaho Tribe. Their non-custodial mother had taken them from a home outside the reservation where they had been placed by the tribe for protection.

Chris McGuire, Wyoming’s AMBER coordinator, confirmed that the children were in imminent danger and that there were sufficient descriptions of the vehicle, suspect and children for the public to help find them. A tribal court had issued a protective order to keep the mother away from the children, and McGuire activated the alert in the state.

The alert generated a lead when the mother, Stacia Potter-Norris, 30, stopped at a glass company to have a rear-window of the vehicle replaced and, with no money, offered to sell some guns in exchange for the work, McGuire said. She left her phone number with the clerk, who turned it over to law enforcement. Another tip came when a homeless man saw the vehicle described in the alert at a truck stop. He watched the driver swapping her vehicle with someone she appeared to know in another vehicle.

Using the phone number the mother gave the store clerk, investigators were able to track her movements to the Denver area. At Fremont County’s request, Colorado issued an AMBER Alert in that state with the updated vehicle information. That prompted a call from someone who saw a vehicle matching that description parked at a Motel 6. Using the motel’s surveillance tape, the children were found safe in Room 222, but the mother had disappeared. She was later found, arrested on felony charges and extradited back to Wyoming.

“This is a success story that could have gone really bad, really quick,” said McGuire, who’s proud of the milestone success story. “It really does show how the AMBER Alert works.”

AMBER got its start in 1996 after Simone, a self-described “ordinary woman and mother” who saw the report about Amber on TV, called the radio station and was asked by the station manager to follow up with a letter, explaining what she envisioned. The station manager promised to present Simone’s idea at an upcoming meeting of regional station managers. In her letter, dated 14 days after Amber’s abduction, Simone wrote that if the radio station could gather enough support for such an emergency broadcast system, she had one request: “That it be known as Amber’s plan.” 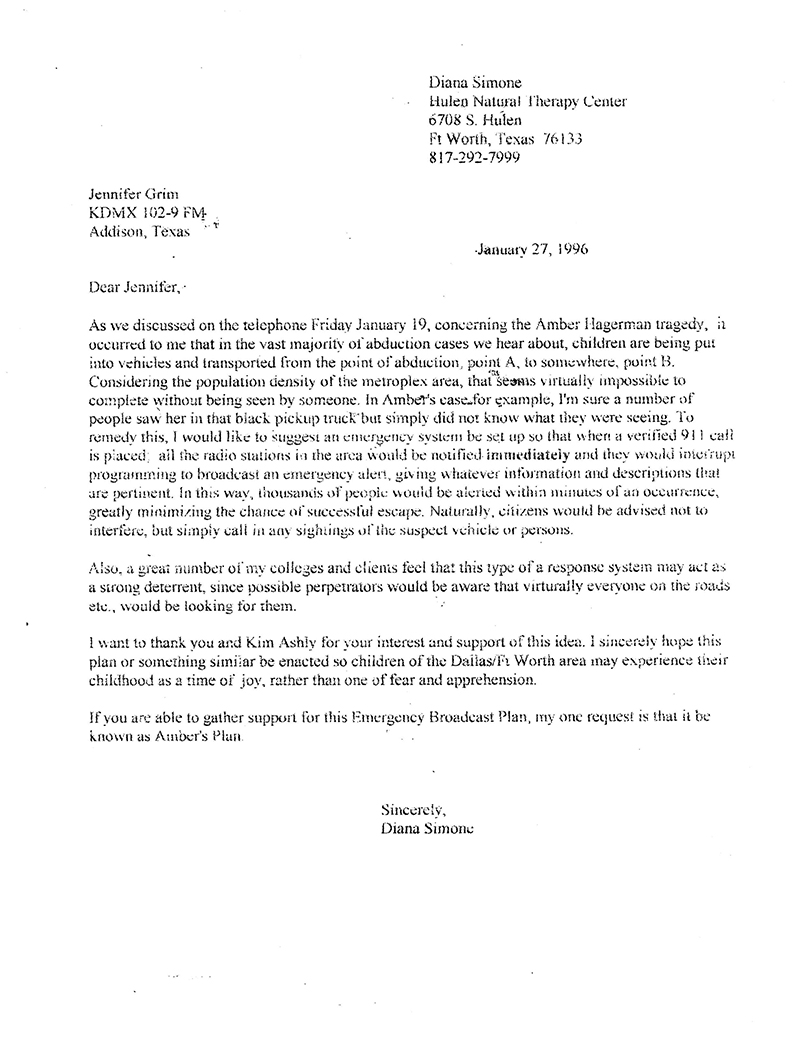 Simone’s persistence paid off, and, with the media and law enforcement working together, the alert system was given FCC permission to operate. But after the first two years, Simone said, when there had been no successful recoveries, she feared its demise was imminent. Then, in November 1998, Arlington, Texas police received a report that an 8-week-old girl, Rae Leigh Bradbury, had been abducted by her babysitter, who may be headed to a crack house.

After she'd been missing for a day, law enforcement decided to give the new AMBER Alert system another try. This time it worked – and it only took 90 minutes for someone to recognize the babysitter's turquoise truck. Rae Leigh was recovered unharmed and now, as an adult, has become a strong advocate for AMBER and a symbol of hope for all families of missing children.

Since that first success, the AMBER Alert system, which is administered by the Justice Department and has 86 plans nationwide, has vastly expanded its reach, using all available technology to get vital information into the hands of people in the best position to help. They’re only used in the most serious child abduction cases, and only those that meet the individual state’s strict criteria. At the direction of law enforcement, the alert is first sent to radio and television stations, the lottery, the Department of Transportation and to us at the National Center for Missing & Exploited Children. (NCMEC) Then we, as secondary distributors, send it out to a wider audience, including internet service providers such as Facebook, Google and Twitter, digital billboards, the trucking industry and truck stops. 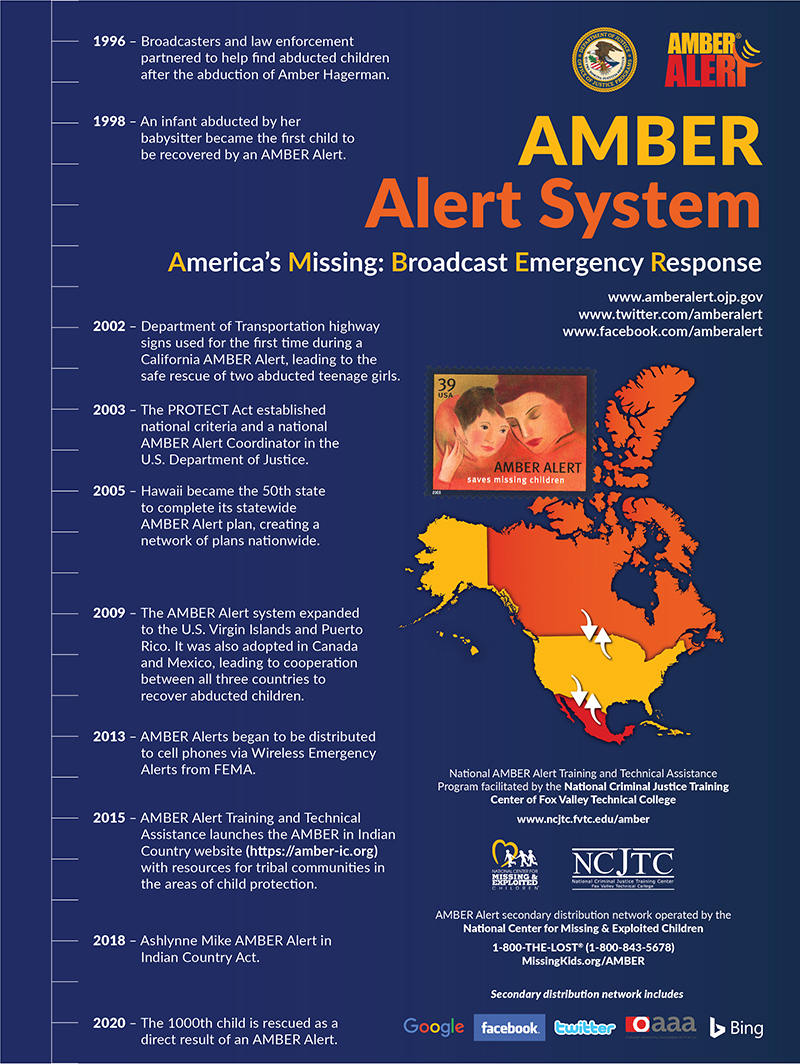 Then, seven years ago, AMBER Alerts got a significant boost. Law enforcement began enlisting the public’s help through their cell phones via a Wireless Emergency Alert, dramatically increasing the chance that the right person, at the right time would see the alert and help save a child. Because so many people have cell phones, more people are getting the information faster than ever before.

“It was a game changer,” said Carly Tapp, AMBER’s program specialist at NCMEC. “Awareness skyrocketed. Now, almost everyone knows what an AMBER Alert is. And when you receive one on your cell phone, please know that the child is in extreme danger. That’s what they’re helping with – the worst of the worst cases.”

Of the 1,000 success stories, 75 have already been attributed to alerts on cellphones, Tapp said. She said there are likely many more than 1,000 cases that have been resolved due to AMBER Alerts, but that it’s not always easy to confirm when someone calls in a tip resulting in a recovery that they had seen the alert, she said.

Twenty-four years later, Simone is thrilled by the sustained success of AMBER Alerts, a wonderful legacy for Amber. And why was she so certain that an alert system would work when others weren’t so sure? Said Simone: “Because I believe in the goodness in people.”