Thanks for visiting the Virtual News Room. We've moved! Check out our latest blog here!

“That’s the one thing my brother didn’t do – run.”

Michelle Williams had scoured the internet, reading everything she could find about abductions, and the advice was always the same: If someone tries to grab you – run. If she had been in that parking lot 35 years ago when her 10-year-old brother, David, was lured away by a stranger, that's what she would have yelled “Run, baby, run!” 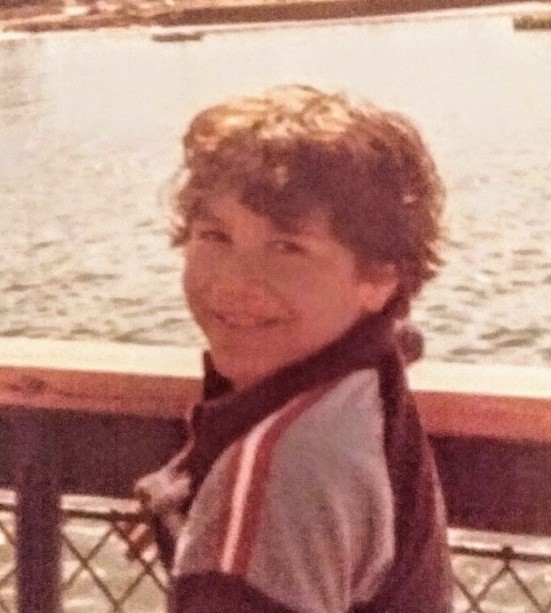 But 10-year-old David did not run. Tempted by a popup carnival in a nearby parking lot, David had snuck out of the children’s room during church service and headed across the street to the temporary fair grounds where a man offered him $5 to help him setup a tent. David was bound and gagged, thrown into a car, and driven away to an isolated area where he was later raped and tortured.

Miraculously, David survived the night with his attacker, and the next day was driven back, beaten and bloodied, to the very parking lot from which he’d been abducted the day before. Thrown out of the car, his attacker fled and would not be located by police until years later when DNA samples from evidence collected at the scene could be taken and analyzed.

David was abducted on October 29, 1983; there were no AMBER Alerts- those wouldn’t come about for over a decade- and there was no National Center for Missing and Exploited Children. NCMEC was officially founded in June 1984, about eight months after David’s attack, and at that point, it was too late for David and his family. It was too late for the local police who struggled to move the investigation forward; evidence would be misplaced, suspects would be misidentified, and ultimately, a guilty man would remain free for years as a result.

The trauma of the attack, the police investigation, the court testimony; it was too much for David. “A shell of his former self”, as his sister describes, David bounced through ten different elementary schools, but was ultimately unable to finish his education. He became addicted to drugs and spent the rest of his adolescence in juvenile detention. On June 16, 2004, after being released from detention and having faced his now-identified attacker, Walter Cruise, in court, David passed away.

Six years later, his sister Michelle would find herself driving in the car with her own son, now 10-years-old himself, sleepily slumped in the back seat, suddenly overcome with memories and the pain of her family’s past trauma.

“Something about the way he was sitting reminded me of how David had described being tied up and thrown in that man’s car and it just shook me mentally,” Michelle says, “I was in anguish, crying, reliving the pain, and I didn’t know what to do. I just prayed to God. I said ‘I know you see me. I have all this pain and you won’t take it away!’ and that’s when I heard a voice inside that said ‘If I took your pain away, you wouldn’t do what you need to do; turn your pain into power.’ And that’s when I ran to my computer and started looking for ways to help abducted children.” 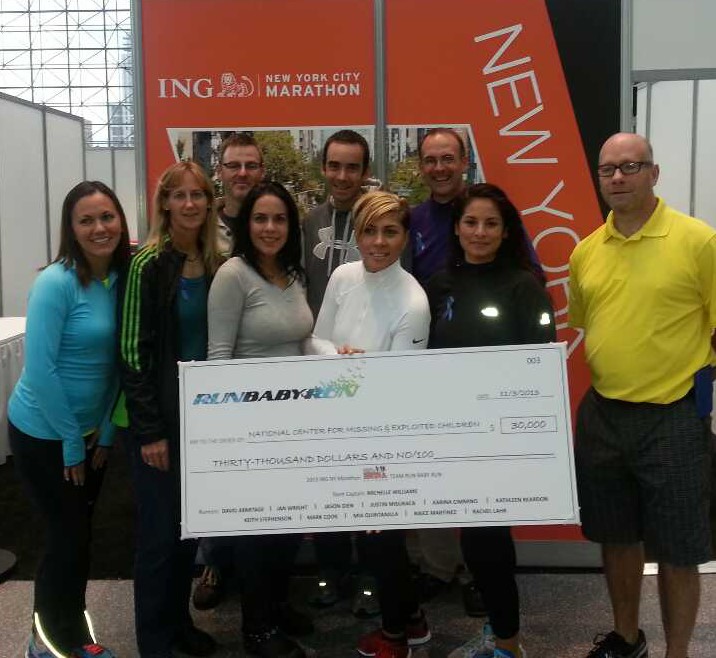 That’s how Michelle found NCMEC. She found NCMEC’s law enforcement training on how to handle missing child cases, she found the abduction prevention and personal safety program KidSmartz, she found Team HOPE, a group of people just like her who had experienced the pain of having a missing or exploited family member, but most importantly, she found a way to channel her pain into purpose.

Michelle knew she wanted to fundraise for NCMEC, but was unsure of how to start, “I thought about organizing a 5k race or something, but I thought no, let’s go big, what’s the biggest marathon in the country?” A quick Google search later, and it was clear which race she had to choose: the New York City Marathon.

“It had to be New York. I think when most people think of a big race they think of the Boston Marathon, but that’s really associated with elite athletes and qualifying times. Anyone can run the New York City marathon- all of us are out there at the same time, doing the same thing- everyone from the world record holders to my 70-year-old mother.”

But of course, the New York City Marathon, the biggest and most popular race in the world, with 52,000 finishers in 2018 alone, is not something you can simply sign up for. Most runners must apply to a lottery months in advance and hope that they are selected. To guarantee entry, a runner has a couple more options, many of which require a membership to a running club or having met incredibly rigorous qualifying times.

For most people, the best option for securing a spot in the race is to use a special invitation code from a charity, partner, or other specially invited party. Unfortunately for Michelle, NCMEC was not an official charity partner of the New York City Marathon, and with over 400 official partners already in the books, it would take making the right connections to break into the crowded field.

“I got shut down so many times. I just left voicemail after voicemail and never got any response,” Michelle remembers. “It wasn’t until I got in touch with someone from NCMEC that we made much headway.” Shortly thereafter, Michelle received an email from a Development staff member asking, “Is this what you were looking for?” It was a letter from the 2011 New York City Marathon organizers, welcoming Michelle Williams as the head of Team Run, Baby, Run, representing the National Center for Missing and Exploited Children.

Michelle runs with a printed missing child poster on her jersey.

With hardly enough time to train (most marathon training plans are a minimum of 16 weeks), Michelle cobbled together a team which included her mother, sister, Danielle, and two members of Team HOPE. That year they raised $16,000 for NCMEC, and every single team member crossed the finish line!

Since that first race in 2011, Michelle’s team has never been larger than eight people, and yet they’ve raised over $130,000 for NCMEC while helping to increase public awareness about missing and sexually exploited children’s issues. The runners wear buttons with missing children or print missing posters directly onto their jerseys. Runners are always asking them about their mission. 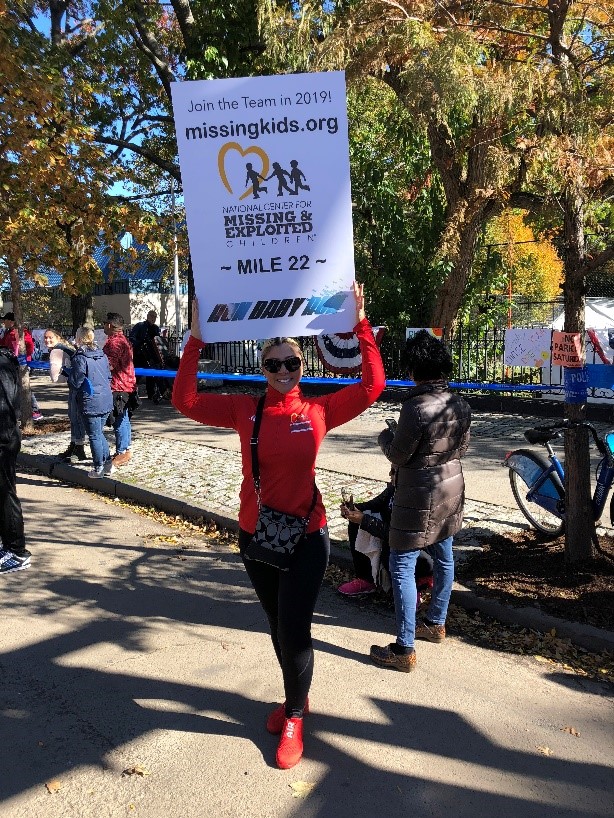 “They literally stop, put their hands to their faces, and start blowing us kisses when they realize what we’re running for,” says Michelle. “It’s different than a thumb’s up... It’s a genuine thank you for what you’re doing. You can feel it so strong – those hands over their hearts or blowing the kisses. It’s just so powerful.”

And YOU can be part of that power! There’s still time to join Team Run, Baby, Run, and yes, there’s time to train for the race, even if you’ve never run anything longer than a 5k, you can finish a marathon. There is nothing quite like crossing the finish line of a 26.2 mile race. The crowds-- the complete strangers cheering you on, encouraging you when you think you’ve reached your limits, and handing you a very timely pretzel stick and Gatorade—it’s an indescribable feeling of support, community, and accomplishment that everyone should experience. Add to all this the fact that you’ll have surmounted this challenge in honor of thousands of children and families, to recognize their fight and benefit a charity that works to find the missing and prevent future victimization… well that’s a runner’s high that will last long past the race’s Central Park finish line.

Learn more about the team